The family of a cruise ship passenger evacuated to a private for-profit hospital in Mexico during a medical emergency were stunned when doctors stopped his urgent treatment after they could not immediately prove they had the thousands of dollars demanded for surgery.

Chase Kehler, a 22-year-old college student from Little Rock in Arkansas, was diagnosed by cruise ship doctors as suffering with acute appendicitis which, if left untreated, can be life-threatening.

He had set sail from New Orleans on a Mexican vacation with his family just a day before, Fox 16reported, on the Carnival cruise ship Triumph.

The Mexican coast guard evacuated Kehler to the Amerimed private hospital in Cancun, where the family said admission cost $6,000 and surgery came with a $25,000 price tag. The ship’s doctor had made the arrangements.

“When we didn’t have the $25,000 they stopped all of Chase’s treatment. They unhooked his IV, they gave him no more medicine,” Janie Kehler, Chase’s mom, told Fox 16.

Writing on her Facebook page, the mother said they were then “forcibly sent” to a nearby general hospital “in a very dangerous area, with limited services and severe lack of staff” because at 2 a.m. they were unable to front the surgery money immediately as a “guarantee.”

“The Amerimed ambulance workers left Chase sitting in a wheelchair in a hallway filled with people and then just left us there. Every hospital in a third world country you’ve ever seen depicted in a movie was what we were dropped into,” she wrote.

After an hour of waiting “in a filthy hallway in a too-small gown” without being checked or triaged, Kehler decided to take action on behalf of her son, who was by now too ill to fly back to America and seek treatment at home.

She was able to stop a passing paramedic in the hospital corridor, who raced her son for free in an ambulance to Hospital Victoria, a private medical facility, where he had surgery within the hour. This hospital only asked for a $6,000 deposit.

“Chase was absolutely unable to fly via plane or air ambulance back to the U.S. so I felt we had no choice but to proceed with surgery. I have just spoken to the surgeon. Chase did fine in surgery. His appendix had not ruptured but was ‘black with a large amount of pus’,” Kehler wrote.

The mother said she had not purchased travel insurance for the cruise.

Amerimed’s Medical Director Fernando Rivas said in a statement to Newsweek that the decision to transfer the patient after his family could not pay “did not place his well-being in jeopardy.”

“From the time of the patient’s arrival, a number of administrative options were presented to the patient and his mother in order to guarantee payment, as is the standard procedure in every private Mexican hospital,” Rivas said.

“Unfortunately, over 12 hours later (during which time patient received medical treatment and was kept comfortable under observation in the emergency room) the patient’s mother was still unable to solve her administrative issues, which essentially came down to a total lack of funds and being uninsured (patient’s insurance policy with no international benefits whatsoever).

“Of note, the patient’s mother never left a deposit in the hospital in any way, shape or form and no payment was made for the services rendered in Amerimed.”

He added: “The decision was made, in adherence to applicable ethical standards, laws and regulations, to arrange for transfer to a public hospital for continuity of care. Transfer took place after medical assessment concluded that the patient’s transfer did not place his well-being in jeopardy.”

Rivas said the issue of uninsured or underinsured American tourists “is, sadly, very common” and that he hoped this incident would raise awareness of the importance of travel insurance.

Upon seeing Amerimed’s statement, Janie Kehler told Newsweek that Rivas “makes it sound like we were indigent beggars.”

“It was the middle of the night! Obviously, I couldn’t get my credit card limit raised or reach my bank at 2 a.m.,” she said.

“Rivas also states ‘a number of administrative options were presented in order to guarantee payment.’ The ONLY option they proposed was paying them $25,000.

Kehler also accused Amerimed of not transferring the care of her son properly to the general hospital.

“We were never checked in, never triaged, never seen or acknowledged by any staff at all,” she said. “We were dumped into a hallway, and the ambulance driver even took the hospital gown off of Chase’s body before he left because it belonged to Amerimed.”

She also disputes Rivas’ point that her son’s wellbeing was never placed in jeopardy, saying the medical signs were “indicative of need for immediate surgery.”

“I am livid that Dr. Rivas is attempting to minimize the severity of the situation. The way the Amerimed staff treated us is reprehensible,” she said.

Carnival Cruises did not respond immediately to Newsweek ’s request for comment. 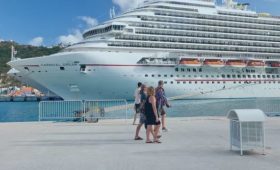 5 Things You Should Never Do on a Cruise 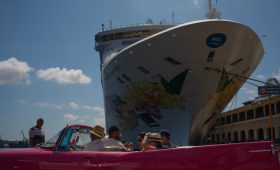 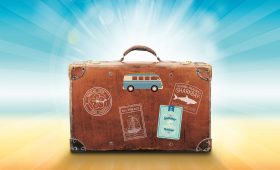 What Travel Insurance Does and Doesn’t Cover